The Difference between Eastern Meditation and Mindfulness Meditation 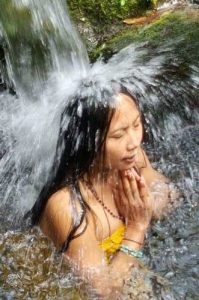 Most of the meditation classes and teachings found online have an Eastern feel. We in the West often think of meditation as originating in those cultures such as India, Tibet, and other Asian countries. Perhaps it did.

The symbolism is very Eastern; images of smiling buddhas, gongs, people in long robes… you get the picture. There is nothing wrong with this in the least. But not everyone feels drawn to teachings based in those foreign cultures. And quite frankly, sometimes when someone has been trained in those traditions, their style sounds a little funny like they are speaking with a fake Indian accent!

I want you to learn to meditate and have it be effective in expanding your consciousness for your life here in the West. I guess you could say I’m very practical about all this stuff. I don’t exactly call what we do mindfulness meditation as it’s become a commercial buzz word but probably not that far off.

My understanding of mindfulness meditation is a practice of being totally present to the very thing you are doing and nothing else. If you are mowing the lawn, you train yourself to have all of your attention on just that task. This has the wonderful effect of making things go faster and a lot better. If you give all your attention to something, you can get more done faster, not in a rushed way but just because you are focused.

When you’re distracted, your energy is diluted so less gets done. Or else you are so irritated about what you have to do that you speed through it with very little attention.

Being mindful is simply focusing your mind only on the one thing that you are doing. In meditation, that might be just concentrating on your breathing. Or in the case of a walking meditation, just feeling each step and not letting your mind start to worry about your emails, texts and which celebrity gained 10 pounds this month.

Eastern approaches to meditation aren’t that far off from this. But they bring in the spiritual element of contentedness and oneness. Mindfulness meditation tends to have a more scientific flavor while the Eastern practices are more esoteric. What this means is that they are often steering you to consciously open to the energies of nature and attune yourself. It can be quite lovely and relaxing when you click into it and your being doesn’t resist by trying to think too much.

Which is better for you? I would suggest you pursue both and see what resonates more with you. In essence, meditation in the beginning is a lot about getting to know your mind. You can’t force it to be still but you make little gains each session by persistently trying.

The main thing is not to force yourself into a practice that doesn’t feel right for you. Some people love the Eastern feel but others feel like it’s kind of foreign. The mindfulness approach will feel more Western but might feel a little too scientific for you. Check them both out.